Have a great weekend!

Cool Car of the Week

Thanks for the great review!

Cool car of the week!

Cool Car of the Week!

Client noticed thumping or banging noise when in sharper turns like when navigating a driveway.  Also noticeable but not as pronounced when doing faster turns at speed (merging off a freeway).

Initially the client took his car back to his tire shop since this problem seemed to occur shortly after having tires replaced.  The tire shop could find nothing wrong with the basic suspension and drive train components (eg:  ball joints, axles and CV joints, struts, etc) and thus they advising seeing a BMW specialist.

Upon arrival Todd performed the same inspection as the tire shop but when that proved to be fruitless he checked the engine mounts – knowing the pattern failure of engine mount to cylinder block bolts.  Sure enough the bolts were broken (engine mount bracket removed in this picture): 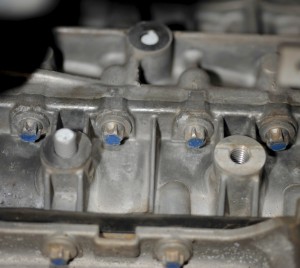 The repair requires extraction of the bolts and replacing them with new. 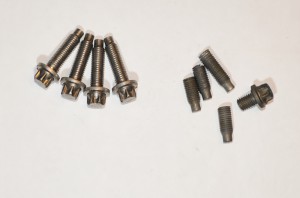 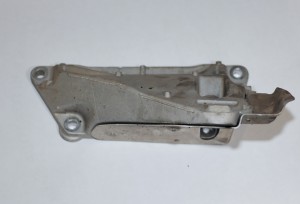 Once re-secured the vehicle is test drive to ensure the client’s concern has been resolved.  We have NOT seen this escalate into bigger problems yet but we suspect that driving one of these cars with a broken / detached engine mount will eventually cause other problems.

The reason BMW use this fastener (bolt) style is the N52 engine has a magnesium block.  A steel fastener, in this application, would cease in the block thus aluminum fasteners are employed.  Unfortunately they aren’t as strong as steel and can break.  On a positive note we have only seen this problem with the all-wheel-drive (xi) vehicles / we suspect this is due to additional rotational forces from the front axles. 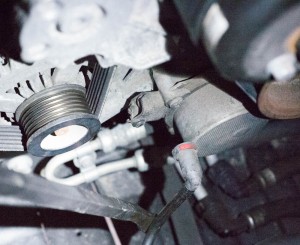 Further inspection showed that one of the engine drive belts had frayed and a sliver of it had broken off and (presumably) hit this plastic fitting and broken it – causing the vehicle to have a sudden loss of brake power assist. 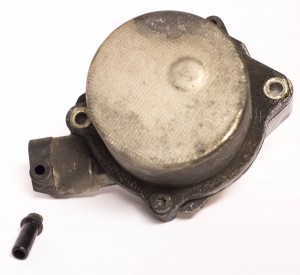 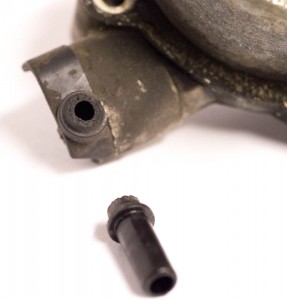 NOTE – KEY to the problem is the location of the water pump belt in relationship to this vacuum pump’s fitting: 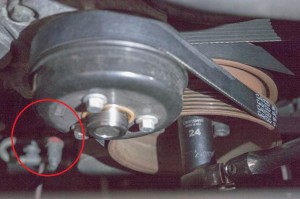 The drive belt that you see in the picture is the water pump and cooling fan belt.  It is of more modern design in that it is a ‘stretch to fit’ belt – it has no tensioner assembly – it is self tensioning.  Our opinion is that this belt failed and hit the vacuum pump fitting and broke it – causing sudden braking power loss.

The repair was straight-forward:  replace the belt and the vacuum pump (the fitting is NOT available as a separate service part from Land Rover).  Interestingly the vacuum pump was on national back-order through Land Rover USA and not available through aftermarket suppliers.  Land Rover updated the vacuum pump part number (this usually means an update to the design) however when we received the replacement pump we were disappointed to see it still has a plastic fitting for the vacuum output. 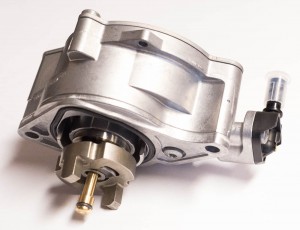 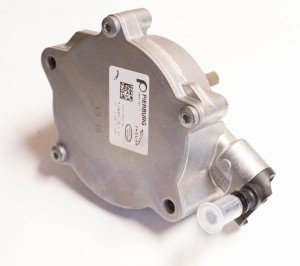 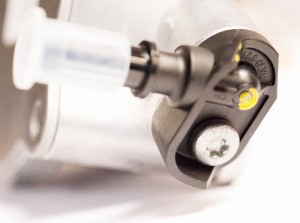 Here’s the special tool used to help install the stretch belt.  We suspect that the installation process can create abnormal strain and possibly premature wear/failure of the belt.  This tool makes the job easier and reduces that risk. 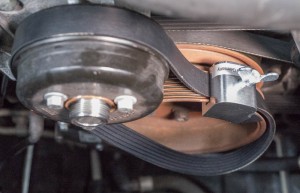 Here’s the new pump installed – NOTICE the proximity to the water pump belt: 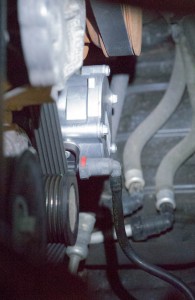 Traditionally a brake vacuum booster is provided its vacuum by a large vacuum hose attached to the engine intake with a one-way check valve to preserve the vacuum.  Some engines – notably Diesels – don’t produce vacuum and thus the design has to change to either an alternative vacuum boost or other power source.  Some manufacturers have elected to use hydraulic pressures for this type of system with the most common being General Motor’s Hydraboost system – which taps power from the power steering pump.  Other manufactures continue to use vacuum as the brake booster power source and add an auxiliary pump to produce the needed vacuum.  As brake vacuum pumps were introduced the typical setup was to provide the brake vacuum boost system with two vacuum sources:  a pump like this on AND engine vacuum.  This Land Rover setup uses a vacuum pump exclusively and, unfortunately, the physical location and the decision to use plastics makes this engine and its vehicles susceptible to loss of brake power assist.  Our advice to vehicle owners:  be sure to service your belts before they fail.  Our advice to the vehicle engineers out there:  if you MUST use a design like this have a belt guard or more substantial materials to ensure a belt failure cannot cause braking power loss.

Performed pressure cooling system tests – confirmed coolant leakage down the back of the engine.

Double-checked other cooling system components to make sure this was the correct repair.

NOTE:  This is a common / known problem on the first generation (9PA) Cayenne.  It only affected the V8 engines.  When the problem first came to light the repair was much worse:  to replace the coolant pipes required removal of the engine to get the rear cross-over coolant flange/pipe out.  This made the repair very costly in labor.  Porsche later updated the parts so that the pipes could be replaced with the engine in-chassis.  The materials were updated as well – from plastic to aluminum.

Generally the work is straight forward:

Start with removal of the airbox and air snorkel tubing. 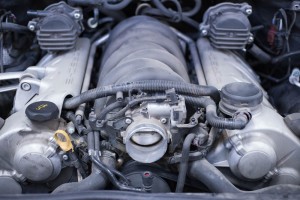 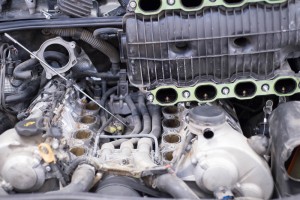 Remove coolant pipes, note  that there is a grouping of three on the top and a lager single pipe underneath. 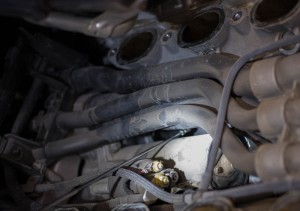 To remove the lower pipe you will have to cut it.  This is why, when repairing this the old way, the engine had to be removed – there is no ‘collapsing’ of the pipe so they can fit with the engine in-chassis.

NOTE – we stuff shop rags into the intake ports of the engine to ensure nothing accidentally falls into the engine! 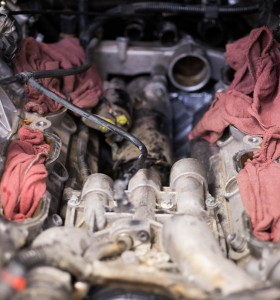 Here’s a close-up of the back 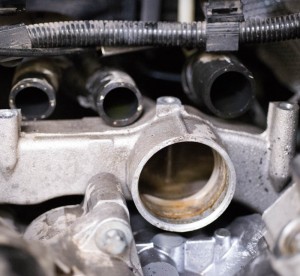 coolant cross over pipe and hoses – rear of engine 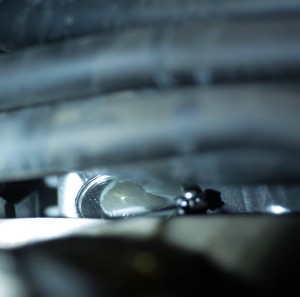 Here is the leak in the lower pipe (pipe removed).  NOTE this leak / crack in the pipe is much (much!) smaller than they typically are when we do this repair 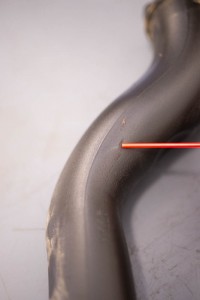 Here’s the new / updated parts.  NOTE how the larger pipe is now shorter and Porsche have provided a short rubber hose.  This change in design is what allows the repair to be done in-chassis (saving very large amounts of labor). 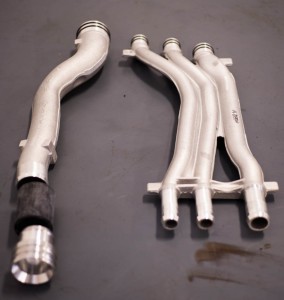 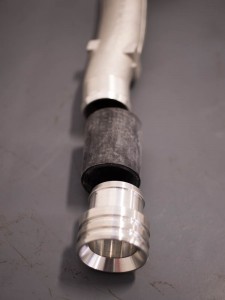 Going back together – here’s the pipes installed. 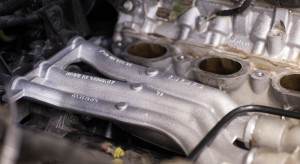 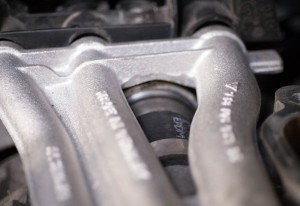 After re-assembly we pressure test the system and get the engine up to temps / ensure there are no other leaks and the repair should out-last the rest of the vehicle.  NOTE sometimes this coolant leak can also damage the torque converter seal (!) – this is usually the case when a LOT of coolant has washed down the back of the engine.  BUT if the vehicle develops a transmission leak shortly after this ‘event’ that is likely what happened.  This leak or defect has given the Cayenne a bit of a bad reputation but we advise to consider it in context:  the is a top-end performance SUV that is otherwise a blast to own and drive.  We see this repair occasionally but it’s not an epidemic.  Let other people think it’s a huge problem and then buy yourself a cool V8 Cayenne for a good price – reduced because of everyone’s fear of this problem!

Pretty simple:  a physical look undercarriage showed a broken front driveline.  The picture below is with the transmission already out of the truck.  The U-Joint on the left side is the guilty party.  This U-Joint started to fail and, because the symptom of more drivetrain vibration and noise wasn’t addressed, the joint eventually failed.  This caused the driveline to spin out of control and smash a huge hole in the transmission case. 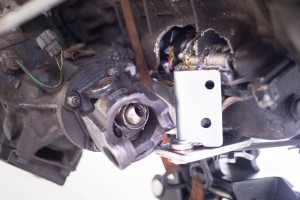 Here is a view further back of the damage. 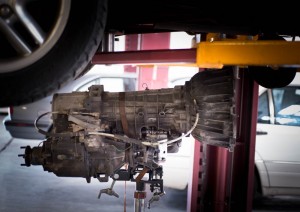 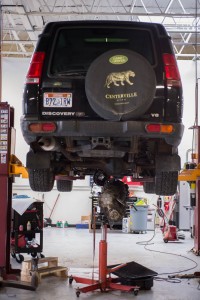 The solution is simple / although painful:  the truck needs a new transmission and drive line.  The tragedy here is that this is completely preventable:  had this come in for service when the drive train started getting loud the repair would have only been to replace or rebuild the drive line.  Any Land Rover specialist like us would proactively inspect this drive line whenever such a vehicle was in for service.  Additionally, despite having a less-than-perfect reputation in other areas, the Discovery’s transmission has actually a good reputation for reliability and longevity.